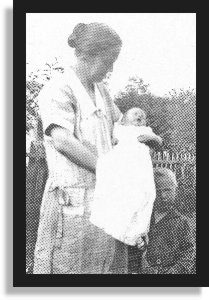 Our founder’s grandmother Minnie Stigall Tomlinson Warner was a highly respected practitioner. Many times doctors knocked on her door to ask if she would accompany them to a birth that was expected to be difficult. According to family legend, Grandma possessed a particular gift for reviving ‘blue babies’ and was credited with bringing many babies ‘back’ that a doctor had considered dead. In those days, she was revered as a healer and considered an authority in everything that had to do with birth and children.

She was born in 1885 and died in 1971. In between, she was a midwife when midwifery was much more appreciated and much less complicated than it is today.

The traditional wisdom of the midwives of her grandmother’s time is no longer enough. Contemporary midwives face a number of new challenges that require an academic advantage.

Normal birth is not definable in medical terms. Childbirth is treated as a disease and pregnant women are prodded through a technical, medicalized system that actually creates complications in an over-zealous attempt to predict or prevent them.

The practice of midwifery is no longer respected as a traditional and vital community service. The medical community generally misjudges and disapproves of midwives. Midwives often find themselves defending their profession in the medical community and in the political arena. Society, in general, is misinformed about birth and midwifery, and there are many potential legal jeopardies my grandmother never had to contemplate.

Today’s midwife has to meet the present technocracy of childbirth head-on, as a professional in her own right, and as a parent advocate and educator.

She maintains her faith in the normalcy of birth, and yet prepares for any possibility.

There is a lot to learn. There is a lot to know. In-depth academic study is an absolute requirement. My theory is that a midwife who ‘knows’ a lot is much more comfortable doing less. The kind of midwifery educational assistance I want to offer is true ‘with woman’ ‘sit on your hands’ ‘assist; not manage’ style midwifery.

That has been our primary work since 1981 – helping midwives acquire an academic advantage.

A midwife with the working knowledge of medical and midwifery terminology, a thorough understanding of the physiology of pregnancy and birth, and an appreciation for medical technology when it’s warranted, is the kind of midwife who represents her profession well.

We’ve been helping women become that kind of midwife for over 35 years!

Textbook study complements practical experience – knowing gives substance to doing. We need to know why we do what we do. It is only when we understand the rationale – or lack of it – for any standard procedure or protocol that we are qualified to deviate from it.

Most complications are rare; a midwife may not learn about many complications through experience. If her academic preparation has been comprehensive, though, she will have some knowledge of every possible deviation from normal and know how to respond without interfering with the natural process.